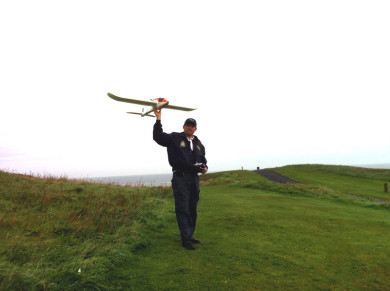 Sky Watch Civil Air Patrol (Northern Ireland) have carried out a search for missing man Dean Patton on Ramore Head, Portrush, using an un-manned aircraft. The search took place at first light on Friday 24 August 2012 shortly after low tide, at approximately 6.40am. High definition video imagery was recorded by the drone at various altitudes. All of the headland, cliff-faces and rock shelves plus 100 metres out to sea was captured. The un-manned fixed-wing aircraft was in the air for just over 5 minutes.

The UAV pilot, Paul Trimble, stated that “During the first deployment of the drone on a call-out the conditions were excellent for searching, even though there was light rain falling. I hope that the data collected will bring some comfort to Dean’s family.”

The request to search was made by Dean’s family and the data collected has been handed over to Coleraine CID for analysis.

The pilot was on the ground observing live telemetry of the flight. The aircraft was stabilised using the onboard auto pilot. The aircraft is battery powered and is made of foam. It has a 1.4m wingspan and weighs just over 1kg.

Sky Watch Civil Air Patrol carries out humanitarian airborne search missions on behalf of statutory agencies, voluntary organisations, families and individuals. The collected imagery is handed over to the agency or individual who has asked for the mission. Sky Watch does not analyse the imagery.

Sky Watch Civil Air Patrol (Northern Ireland) has permission from the Civil Air Authority to operate drones in the UK, in full compliance with the Air Navigation Order 2009. 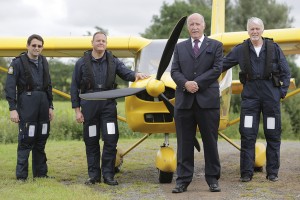 Sky Watch; an airborne observation charity which has been operating UK wide for the past 10 years, carry out aerial observation work searching for vulnerable, missing people while also assisting the NI Fire & Rescue Service, attending fires where fire fighters, wildlife and the environment need protection.

As a charity Sky Watch have invested considerable time, money and effort into preparing an aircraft and training staff to perform this valuable activity and Survitec Group are proud to support them by providing aircrew flight suits and aviation lifejackets for all the crew.

Moya Johnson, Managing Director of the local Survitec Group factory in Dunmurry commented “We are so pleased to support such a worthwhile charity. The dedication of all the pilots involved is tremendous and by giving a few of our award winning products to the team we hope we can make all their journeys as easy and comfortable as possible.”