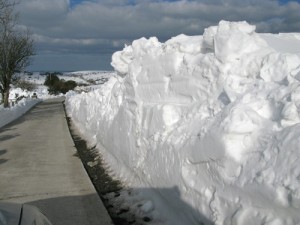 The last few days have seen a number of visits to the County Down hills, in particular Dromara and Slieve Croob where over six feet of snow has fallen and buried many roads, valleys and even whole farms.

Snow build up has caused buildings to collapse killing many of the animals sheltering inside while others were simply buried outside or died from exposure.

Skywatch has been actively working with farmers in the area to sweep inaccessible areas, particularly around Slieve Croob for missing sheep and other livestock. The Irish Army and RAF have also been operating in the area to deliver feed in what continues to be severe weather conditions. 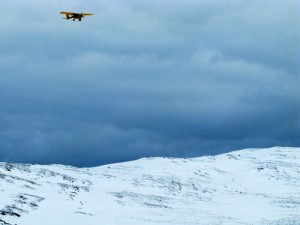 The rare conditions are hard to be believe as Banbridge and Dromore have virtually no snow at all while a short drive into Dromara reveals treacherous conditions and impassable build ups of snow and ice.

A thaw over the coming days is expected to reveal many more animals previously buried while also causing major flooding in the area.

Kieron (18) and Alexander O’Brien (21) went missing after travelling to Londonderry on Thursday past. Foyle Search and Rescue, accompanied by the Irish Coast Guard searched the Foyle and requested Skywatch to provide a drone to search by remote camera, areas which were inaccessible to boats and rescuers.

The story can also be seen on BBC News.